The Launch of See...V...Edere took place on the 10th of March 2000 at the Unity Theatre in Liverpool. The evening comprised music, drama, a lecture, a visual art exhibition, and a food tasting.
There was an audience of about 60 people who were from a range of age groups and backgrounds. The audience was led into studio 2 at the Unity Theatre where they were entertained with music by Oscar and Francisco Carrasco. After introductions, there was a lecture by Dr. Fabio Bortoli about the Ancient Venetian Culture with more music and a theatre performance.
The audience was then led from the studio and around the theatre bars and hallways to view the exhibition, with the musicians playing, the artist singing /performing and other members of the cast dancing to the music. 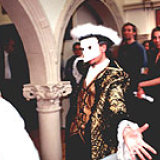 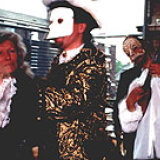 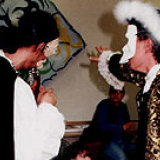 This was quite comical, as the audience were not expecting to be serenaded on their journey around the exhibition.
The audience was then called upon to dance and then invited to help themselves to the prepared buffet of Venetian delights and also to enjoy the exhibition at their leisure. Everyone enjoyed themselves, this was a unique cultural event bringing music, dance, art, cuisine, and education together and in which the audience was encouraged to participate.


The visual art exhibition continued for 3 months and received much positive feedback.