The Humanity Carpet
By Piero Bortoli 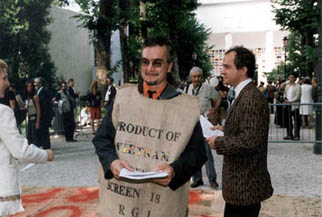 The Humanity Carpet
By Piero Bortoli

The Humanity carpet is made up of 80 jute sacks (80cm x 40 cm each), previously used to transport coffee from developing countries to the Lombardo Veneto (LoVe) Coffee Company in Venice. They have been sewn together by hand, and bear the slogans “Benvegnudi a el Tapeo de el Omo” and “Welcome to the Humanity Carpet.”
The Tapeo de el Omo is a super hero among carpets. It crosses oceans, speaks in various tongues, and finds its mission according to where it’s at. On its first appearance at the Venice Biennale 2001, it lay irreverently across the main thoroughfare. Like the disinfectant footbaths in a public swimming pool, it had to be crossed to reach the art. A frustrated outcry at the course to be run to reach the vitrines of the monied art markets, too well known by those in the know, too long sweated over in fear by those outside the name-fame-money game to go into. 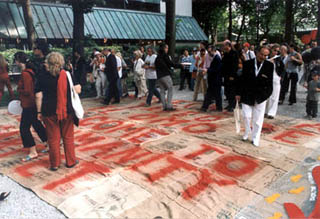 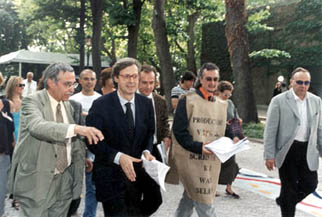 Commedia dell’Arte’s Brighella finds himself stranded on the Humanity Carpet in a war zone. He has lost his memory and expresses his dismay in the Venetian dialect. His traditional rival in love and social standing, Arlequino, moved by Brighella’s helplessness, forces Brighella’s memory to the fore by chanting Roma football team’s spurring hymn, “Forza Italia”, a hymn also adopted by Italian Prime Minister, Silvio Berlusconi, as his political campaign slogan. Arlequino, too, easily draws thoughtless, bewildered and eager-to-please spectators to join him in his chant. Brighella remembers everything:
Kidnapped from his master, Pantalone, by Berlusconi, and sold to the Bush & Blair Consortium, Brighella was sent to work in the coffee plantations. Even after he escapes from this slavery into a war zone, Brighella can only express his continued devotion and need for these manipulators of his fate. As Arlequino and Brighella’s journeys merge on the carpet, mimed escapes, colluding dances, projected translations, images of commercial well-being and human suffering are interspersed with South American protest songs and rhythms, laments of devalued love, poetry and the time defying sounds of the harpsichord. Mimicking his adored political masters, Brighella leads a pliable following from the humanity carpet to the bomb carpet: a roll of bubble wrap, every step an explosion. This following is now invited to engage with this (his)story, to mark their personal allegiance with big coloured marker pens on paper, experiencing the risk and responsibility that adopting power brings. 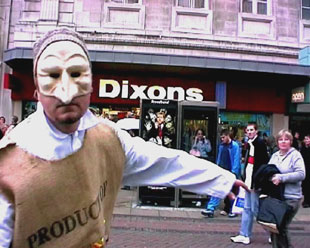 In the journey of the jute sacks through humanitarianly unfair trade routes to the LoVe factory, a developing world’s dependence is echoed in the Venetian dependence on the tourist trade, the very steps of which threaten its foundations. The rich mercantile multicultural Venice of the past has ceded to the America of the future. Bush stands as an unprepared phoney. Blair, from being the leader of a Protest Party, has found himself leading a Government, forgetting how to tell left from right on the way. And Berlusconi has replaced the Doge. Corruption, disorganisation, favouritism, adapting legal mores…Not an unfamiliar style of government in any times. Silvio manages to unsubtly carry it off in a Europe that at one time found it’s united identity in standing up against such internal vagaries.

The disappearing local life of Venice embodied in its spoken dialect and representing cultures eclipsed by an economic god, stands beside the emerging dominant culture of its Anglo Saxon rival. They tussle. Venice fights. The Anglo Saxons come down heavy handed. Caught up in the wash, even the Venetians find themselves colluding. The Humanity Carpet hosts the struggle of a world divided into Winners and Losers, titles that help to distract from what really happens in people’s lives.